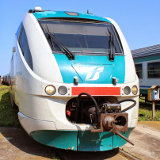 The European Rail Traffic Management System (ERTMS) is an initiative supported by the EU, with the objective of improving safety and increasing interoperability of rail transport in Europe through a Europe-wide standard for train control and command systems, replacing existing national systems.

ERTMS consists of two parts: the European Train Control System (ETCS), an automatic train protection system providing in-cab train control; and GSM-R, a radio system based on GSM for voice and data communications between the train and trackside. However, a workshop conducted by the European Commission in 2013 highlighted the risk of obsolescence and saturation of the current terrestrial communication system (GSM-R) already by 2030. The Commission has therefore tasked the European Union Agency for Railways (ERA) to launch a full-scale investigation, the "Evolution of Railway Radio" programme, to identify and select the possible alternatives to be implemented by 2022.

The main users' requirements have been issued in the "Future railway mobile communication systems - User requirements specifications" by the International Union of Railways, and in the 3GPP TR 22.889 "Study on Future Railway Mobile Communication System". Finally, an assessment of satellites in Future Railway Mobile Communications System (FRMCS) has been reported in "Study on feasibility of SATCOM for railway communication" as the conclusion of a study funded by the EU Agency for Railway (ERA). This activity will review the existing user requirements and will develop a satellite air interface capable of addressing those needs. Existing solutions such as ETSI S-MIM and ETSI S-UMTS (TS 102 744) may be considered and adapted to meet the requirements. The resulting waveform needs to be compatible with 5G core networks given that 5G terrestrial networks are expected to provide also services for railway control communications in commercially viable geographical locations. The performance of the resulting air interface will be validated through realistic packet-level simulations. Finally, the activity will develop and validate a prototype implementation of the resulting air interface in a Software Defined Radio (SDR) platform already certified for railway control communications.