The goals of the project are:

6) Aggregate links of different nature (delays) in order to make them acting as one single link, getting away as much as possible the link per link management

The system is composed of three key subsystems: the communication element in the train, the HUB and the backend. 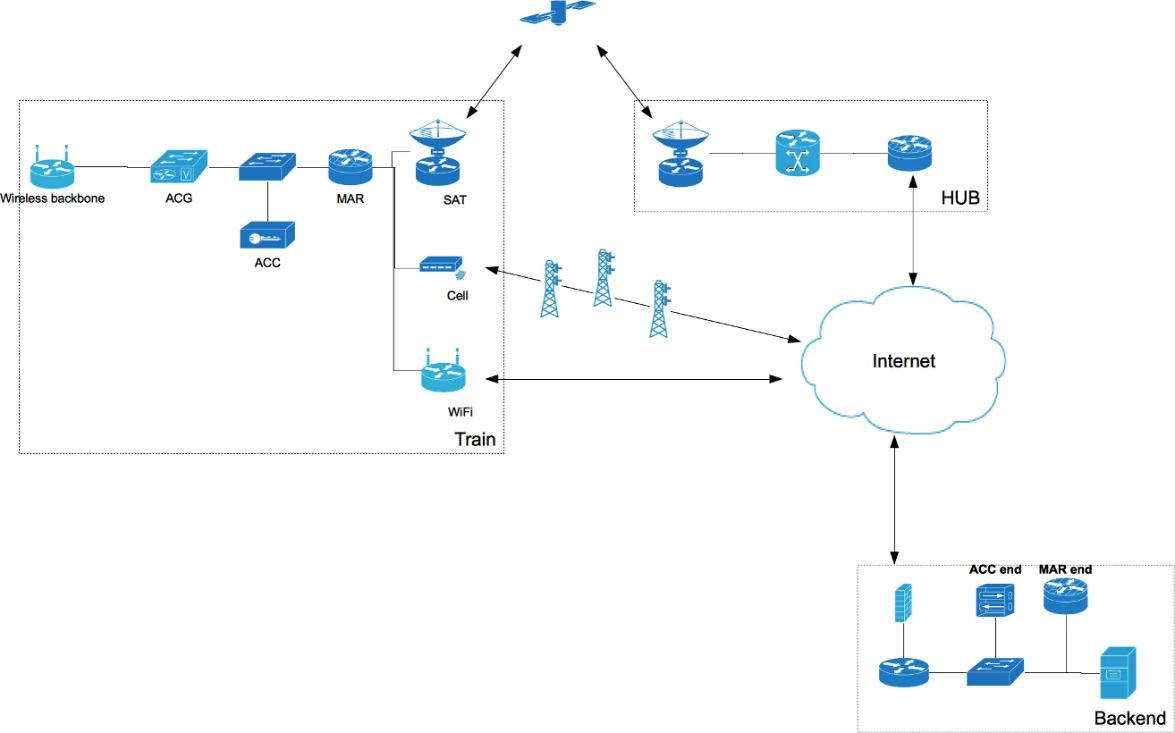 The train subsystem is composed of:

The back end  is composed of the coupled element of the MAR and the ACC.

The project is addressing the following features:

The MAR implementation has been performed in three successive stages:

MAR 2.0: To bond link of the same nature (cellular, WiFi)

MAR 4.0 To bond link of different nature (satellite, cellular, WiFi) making a major step forward in terms of performance. MAR 4.0 embodies all the experience accumulated over the EOMST experimentation and testing in live conditions. It integrates packet-switching through a Multipath TCP (MPTCP) with major improvements based on TCP tunneling between TCP proxies residing at both ends of each link.

USERS AND THEIR NEEDS

Users targeted are in Belgium/France/Netherlands and Germany (Thalys) and U.K (Caledonian Sleepers)

Satellite communications complement the use of mobile network technologies increasing the availability and offering competitive solutions complementing terrestrial technology or replacing it when not available.

In the first project phase was successfully held on a train of the Thalys fleet between the April  2014 and May  2014.  The results confirmed the correct functioning of the system. The availability of the service has increased by 5%. The biggest improvement has been made on the routes with a better cellular coverage. This shows that the bonding (only available between links of identical nature) technology helps significantly to increase service availability. The offered average bandwidth on trains has also been increased by 30%. Eventually the price of the satellite capacity had also decreased thanks to the more efficient satellite technology (ACM).

A second pilot was successfully held on a train of the Thalys fleet between October 2015 and January 2016. With a system availability average of 99%, the pilot was demonstrating that the new system is capable to satisfy the expectations of the customer in terms of Internet availability. The data collected during this time have shown a very good performance of the Internet Service on Thalys trains with values in most of the cases steadily over target.   The results confirm the good working of the system. The bonding (working between links of different nature) technology helped significantly to increase the service availability compared to previous solutions. The offered average bandwidth on train has also been increased.

In the third phase of the project an enhanced Mobile Access Router (MAR 4.0) is under design.  The project has passed the Baseline Design eview (BDR) in October 2016. A trial on a Caledonian Sleepers train is expected in Summer 2017.