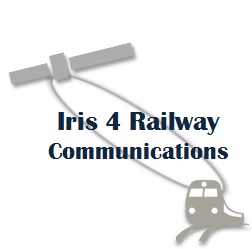 The “Iris for Railway Communications” (Iris4Rail) study has the objective of performing a feasibility assessment of the Iris Satellite Communications (SatCom) solution (https://artes.esa.int/iris/overview), which has been specifically defined for the aeronautics domain, in the railway operational scenario.

The study, which started in April 2018 and was concluded in March 2019, has been performed by an industrial consortium composed of Thales Alenia Space in Italy, acting as leader, and Indra Sistemas.

The key objectives of the Study are the following:

The European Commission has highlighted the risk of obsolescence and saturation of the current terrestrial railway communication system (GSM-R) by 2030. The Future Rail Mobile Communications System (FRMCS) and the European Union Agency for Railways (ERA) programmes have the objective of identifying solutions for a successor of GSM-R, and ERA “Study on feasibility of SatCom for railway communication” has analysed several SatCom system solutions with the outcome that there is no currently deployed SatCom system meeting all the simultaneous criteria for railway safety applications (i.e. critical).

Among the planned systems, the Iris FOC (Full Operational Capability) is a candidate solution to complement existing and planned terrestrial communication systems for rail, and is the best positioned to meet the criteria for critical applications.

Extending the scope of the Iris service can provide, as major benefit, an extended set of end-users with the same service infrastructure. 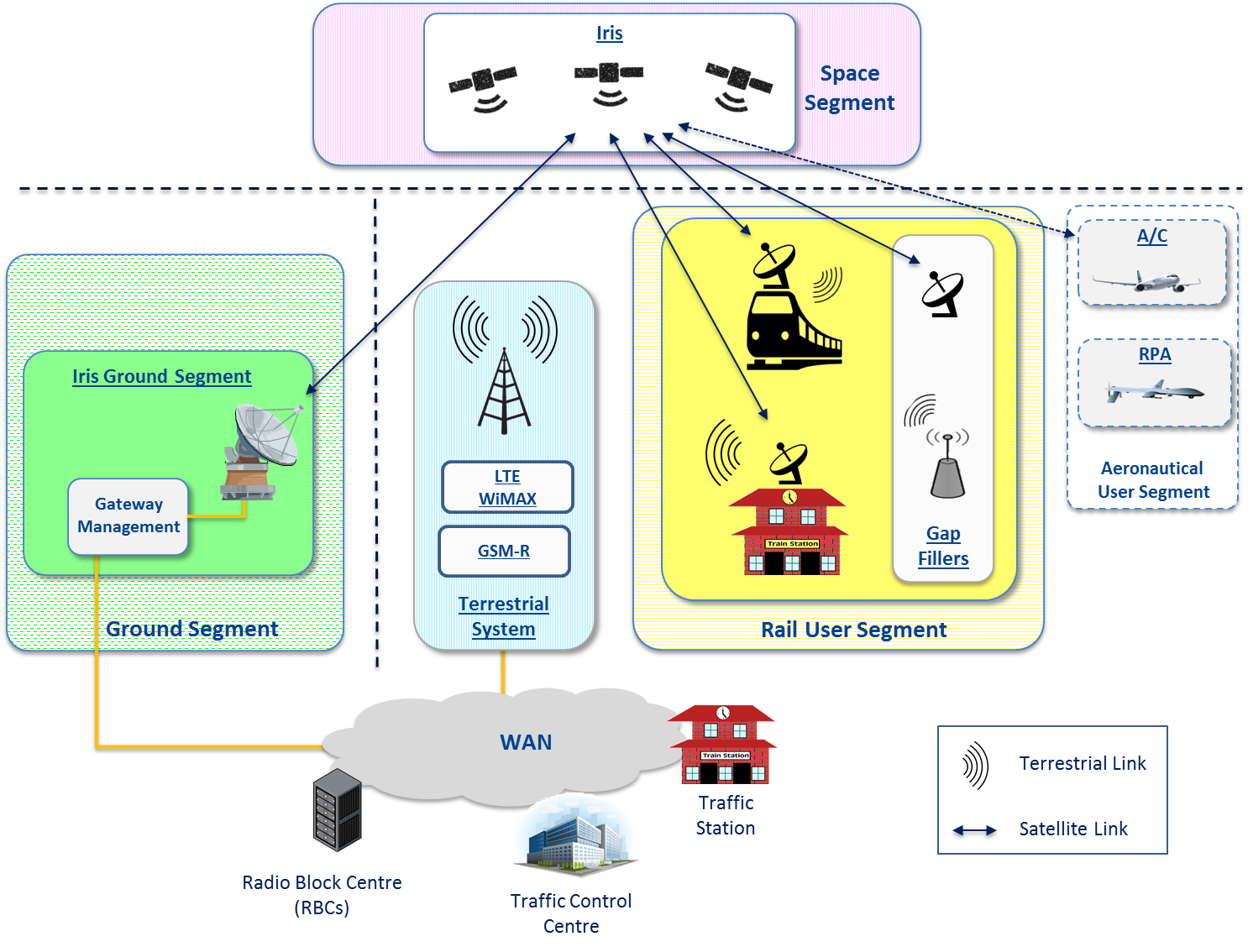 The main functionalities are distributed among the different domains of the Iris for Railway communication operational scenario. 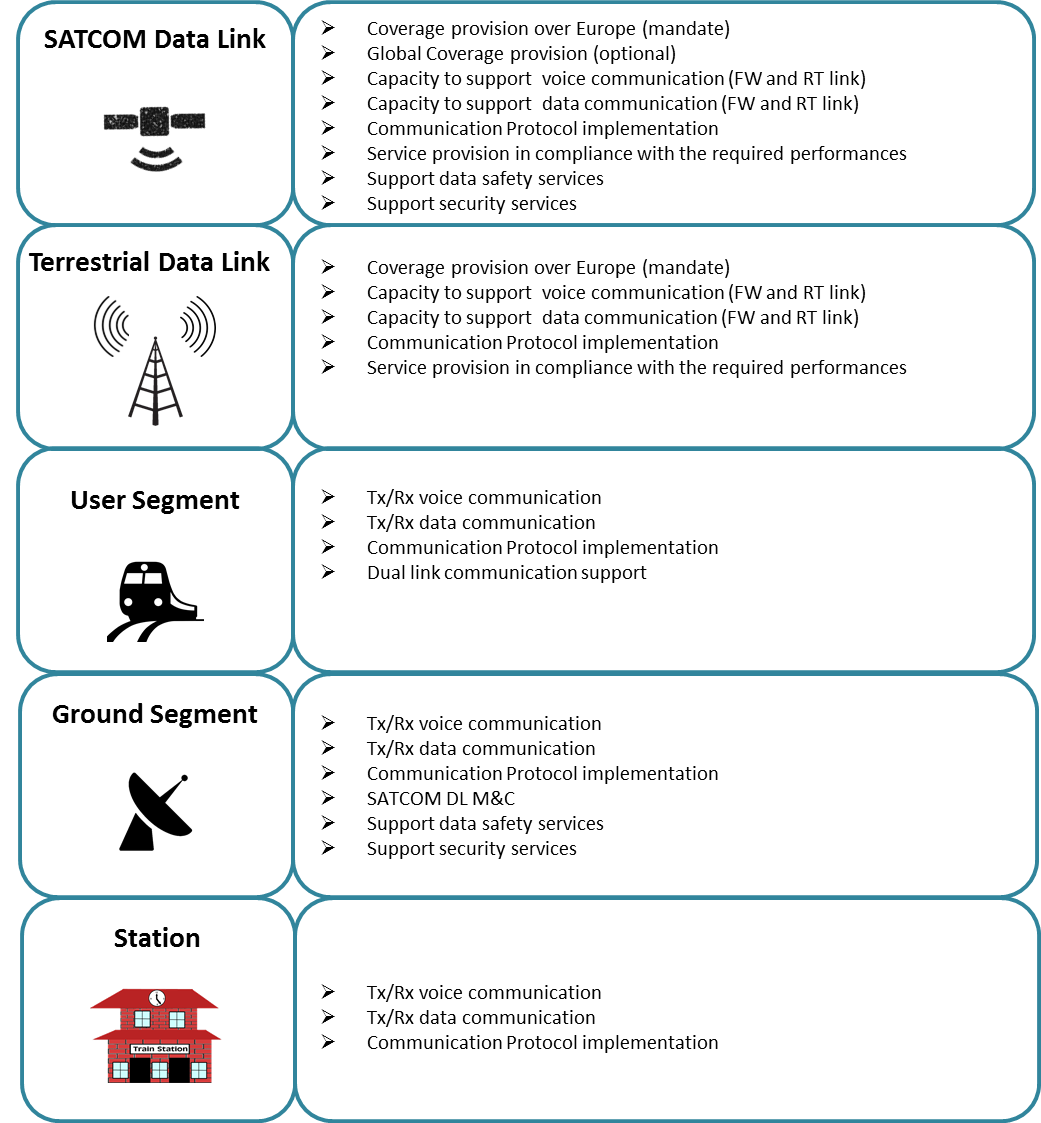 The service scenarios are defined according to FRMCS User Requirements Specification where two different typologies of area of operation are considered:

The considered applications are categorised as follows:

Business applications (e.g. internet in trains for passengers) are out of the scope.

The complete stream of activities performed in the Study is:

The following main conclusions and recommendations are derived from the Satcom for railway technical requirements identification activities:

The overall objective would be to be able to specify a subset of applications with carefully adjusted requirements in order to be able to provide services to the railway community (e.g. additional coverage, backup service, etc.)

With respect to the traffic capacity analysis, a Railway Traffic Dimensioning tools is developed, providing an instrument for the estimation of the railway data traffic to be supported by SatCom, generated by a single railway user and aggregated for a customisable region.

The analysis scenarios take into account FRMCS User Requirements and the outcomes of the Satcom for Railway Technical Requirements.

Finally, based on the outcomes of performed technical analyses, a gap analysis and a Preliminary Technological Roadmap have been identified, as reported in the figure. 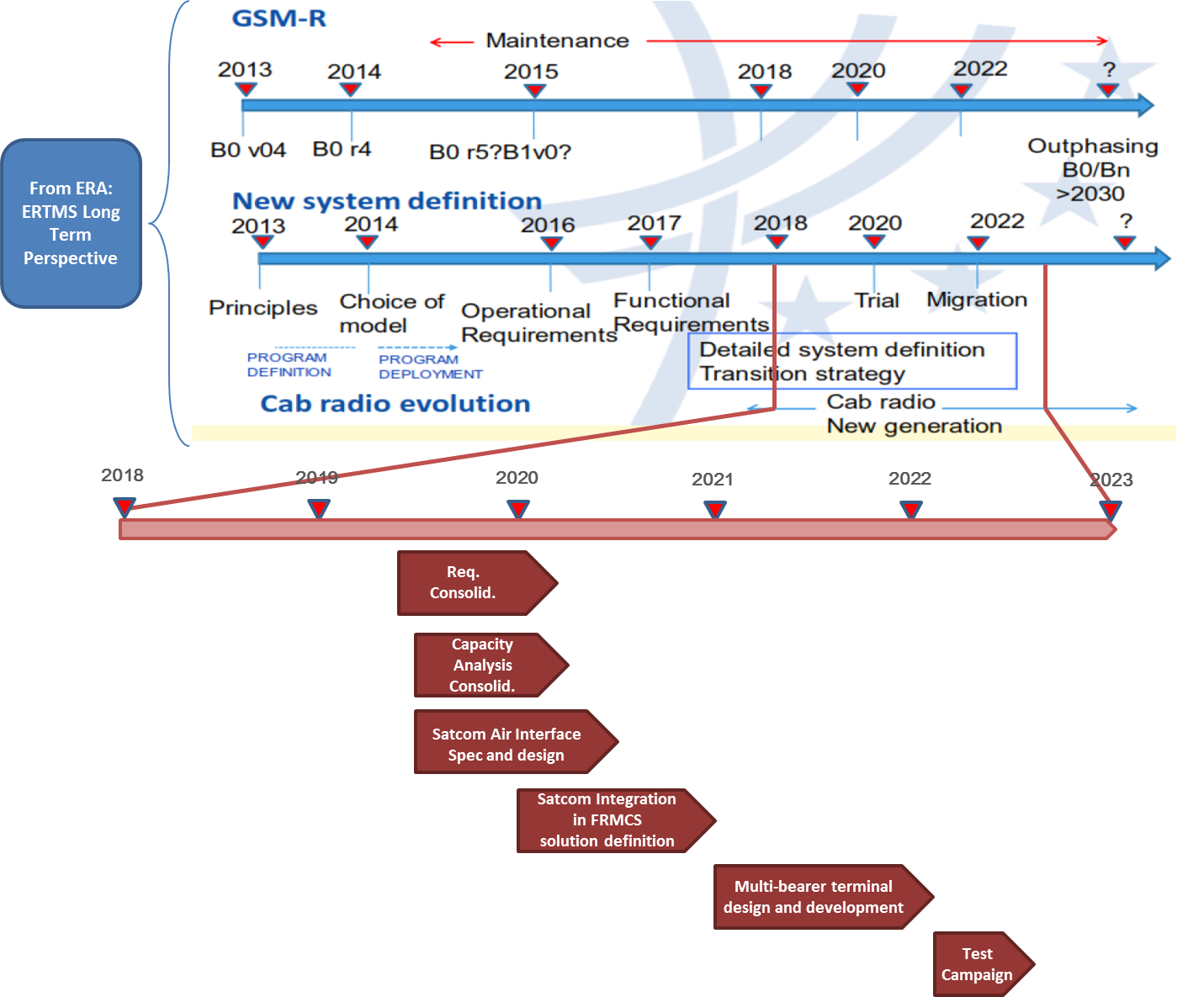 As a conclusion, the following two main recommendations are derived from the performed activities and are agreed amongst all the participants of the “Iris4Rail Final Presentation and Dissemination Event” hosted by ESA at ESRIN premises in Frascati, on 14 March 2019:

The Study has been completed.

The performed activities and key achievements are:

The main achievements and conclusions are summarized in the Final Report.