The SBS-RailS Study investigates how GNSS and Satcom technologies can be used within the ERTMS and its foreseen evolution.

In this context, the study is taking as input the Virtual Balise concept as it is being defined by the Next Generation Train Control (NGTC) project and the Future Railway Mobile Communications System as defined by the UIC (International Railway Union). The concept of virtual balise detection using GNSS has been defined in order to minimize impacts on the existing ETCS.

The study will additionally investigate Satcom solutions suitable for the introduction of future carrier independent telecommunication solutions as a replacement for GSM-R. The introduction of satellite technology shall minimize the modification to the existing standard ERTMS/ETCS, shall guarantee interoperability with the existing specification and shall reduce the complexity of the commissioning and of the operational scenarios.

An important part of the SBS-RailS study is the Proof-of-Concept, whose main objective is to further investigate critical issues through simulations and analysis before launching dedicated test campaigns. In particular, the following elements are included in the study:

In the figure below, a general architecture of SBS-RailS ERTMS with GNSS is illustrated. Blue boxes represent the existing ERTMS system, Orange boxes are the new elements introduced.

The key elements are: 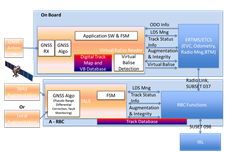 The Satcom solutions analysed will be assessed against the Future Railway Mobile Communication System User Requirements Specification. All the solutions taken into account will be used in a multi-bearer environment taking into account the guidelines given by EUAR for the evolution of the railways radio communication system for operation and signalling.

In the figure below, a general architecture of SBS-RailS ERTMS with Satcom is illustrated. 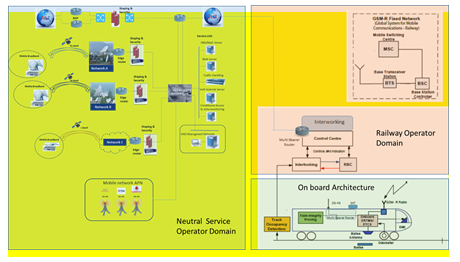 USERS AND THEIR NEEDS

Potential users of Space Based Services for Railway Signalling are either Infrastructure Managers and Railway Undertakings in Europe and worldwide. The study has identified the Community of European Railway and Infrastructure Companies (CER) and the ERTMS Users Group as reference users.

The typically high investment required for the implementation of the ERTMS standard constitutes an obstacle for the deployment of such a high safety standard in Regional Lines and Local Lines.

The drivers of main cost are:

The SBS-RailS Study will target the scenario of local and regional lines in Europe. Approximately 50% of these railways are currently operated with different legacy solutions and lack in many cases the high safety standard achievable with the ERTMS.

The aim is to reduce cost (CAPEX and OPEX) of ETCS trackside by reducing the number of real balises installed along the track (reducing also exposure to theft and vandalism), and to find alternatives to terrestrial solutions for communications when terrestrial antenna deployment is not economically viable.

The project has now reached its Mid Term Review; a general architecture has been identified. The consortium has now commenced the proof of concept activity.